"FOR REAL"
CHRISTIAN UNDERGROUND NEWSPAPER ARTICLE ON THE JESUS MOVEMENT

You saw the LOOK magazine article (Feb. 9 issue) on The Jesus Movement, didn’t you? Did it send up a barrage of question marks? Questions like "Is it for real?" "What gives?"

The LOOK feature says that the West (southern California in particular) is caught up in a new thing. Jesus is rising. He’s the latest movement, the latest thing to groove on. It shows every sign of sweeping East and becoming a national thing. The basic message? "Turn on to Jesus."

Great! Great, I thought, if it’s for real. I live in Southern California. Why not go out to one of the churches mentioned and see for myself? I did. Would you believe I’ve been going back every chance I get?

Hey! Like wow! (That seems to be one of the expressions you hear a lot out there, by the way.) It’s just another way of saying what words alone can’t convey. It’s so great, so beautiful, so tremendous. And it's really real.

I went to Calvary Chapel which is astride the Santa Ana-Costa Mesa boundary. As I approached, across a wide open field I saw cars. Cars. And more cars. Good grief; I started looking for a place to park. Off in the distance I saw this chapel. Question: where do they put all these people? I wondered and was amazed.

People! Never before (at a church service) had I seen such an assortment of people. (And this was the third morning service!) Young. Old. Middle-aged. Bare feet. Boots. Long dresses, faded jeans, grubbies. Later I was to, hear "The Love Song," a musical group of five fellows, singing a song that described the scene perfectly. It went like this: "Long hair, short hair, some coats and ties. People finally coming around, looking past the hair and straight into each other’s eyes."

I'm not sure what I expected to find. I do know I honestly wondered if all the neat things I'd been hearing and reading could really be that neat. Right on! It was right on.

Like the music. The LOOK magazine article quoted the writer, Brian Vachon, as saying: "It was unquestionably the most remarkable week of my life. They had the best sounding music I've ever heard."
I'd read that and thought to myself: That guy's no doubt been around, afterall he is a writer for a national publication. Is he exaggerating? Well, he wasn't! They've got five of the greatest music groups you'll ever hear.

Singing by the people in the pews (and standing outside) was equally impressive. Speaking of standing outside... After my initial exposure on my first Sunday visit (morning and evening) I decided to go again on Wednesday night. They have Bible classes every night but I was told mid-week was a good time to go. "Come early," I was warned, “the meeting starts at seven ..." Some friends and I pulled up about ten of seven. We were in for the surprise of our lives!

Lonnie and Debby Frisbee at a Bible study
The whole place was a swarm of faces. These were the "Jesus People." Their faces radiated that inner something that could be described as an absolute "high." There was standing room only outside -- a thousand or more people jammed together in the chill ocean air, shoulder to shoulder. The chapel (which seats 1,000) was completely encircled with people sitting and standing both inside and out. These were the "street Christians." Their love and zeal was clearly showing. Their conversation was punctuated with "Praise the Lord !"

Inside the Chapel, Lonnie Frisbee, bearded young ex-drug addict, now an evangelist, was seated on a stool on the platform. Debby was strumming her guitar and everyone was singing. Later, Lonnie led in a Bible study. This meeting would see 80 to 100 or more people responding to the reality of Jesus as The Way of life. This happening happens every night.

﻿One girl summed it up well: "Why are so many thousands of people flocking to Calvary? They aren't getting religion and church; they're seeing Jesus and the Bible and love."Love. Yes, that was it. I felt it, too. Love bouncing off the walls! But the love doesn't just remain inside the place. These are a different brand of "activists." They sing, "They'll know we are Christians by our love," and then they go out and demonstrate it. A spiritual fire is burning on the West Coast. I saw it. I heard the words that kindle the fire in individual hearts as it came from the lips of Pastor "Chuck" Smith. I wondered about him, too. What kind of a guy would a church like that have anyway? I figured he had to be somebody pretty special. Different somehow. I found out. 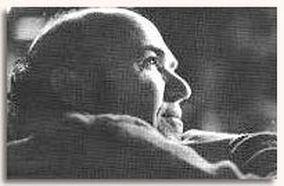 Pastor Chuck Smith
"Chuck" Smith is a very ordinary man (balding, with a dark fringe of black curly hair, 43, married, the father of four children) with extraordinary love, patience and understanding. Special alright in his ability to communicate for Christ as he reaches out tugging at heart strings. Special in his desire to be in the center of God's will with a smile that lights up his face. His morning sermons are based on ten Bible chapters assigned to the congregation for each week. Evening meetings are question-answer sessions on the same chapters. Beautiful! The open Bible in everyone’s hand. The "hungering and thirsting" being fed. Yes, this was different. This was New Testament Christianity in action.

Who are the fellows and gals who sing in these rock musical groups? For the most part they have been involved in the "hippie" movement. They've experimented with drugs -- many of them have been heavy users and pushers. They've tried eastern philosophies, vegetarianism, and religious cults. Their quest for truth and spiritual fulfillment ended a long, restless, unfulfilling search when they became exposed to true Biblical teaching and submitted their lives and talents to Jesus Christ.

Most of them, like Chuck Girard, started singing in high school groups. Chuck toured the U.S. with rock and roll shows about 1961-1962 and had two national hit records and released an album. The stories of Chuck and others like him are beautiful demonstrations of what happens when Jesus starts moving in a life.   That's real "everlasting water" that satisfies. You maybe wondering, "What do you mean by that 'everlasting water' bit?" It's from the Bible. Jesus came to a village well in Sychar (in Galilee) and was thirsty. He approached a Samaritan woman drawing water and asked her for a drink. She was surprised that He, a Jew, would ask a "despised Samaritan" for anything, and she remarked about it.  Jesus replied, "If you only knew what a wonderful gift God has for you, and who I am, you would ask Me for some living water!”  Jesus replied that people soon became thirsty again after drinking that water. “But the water I give them,” He said, “becomes a perpetual spring within them, watering them forever with eternal life.” (From Living New testament John 4:1-26) He then revealed to her that He was the Messiah -- the one prophesied about by her ancestors.

What does it take for this movement to sweep across the country? The Bible says: "It will come to pass that I will pour out My Spirit upon all of you!" (Joel 2:28 LIVING OLD TESTAMENT) . God's Spirit changing lives. Changed lives giving evidence of receiving Christ. A complete turn-about. Throwing down of drugs. Cleaned-up insides evidencing this in cleaned-up outsides. Same faces, but radiating. Same bodies, same clothes, same hair, but clean for Jesus.  And then, acceptance and compassion in the hearts of the adults who, far too often, criticize, show un-love, and who "put down" that which doesn't quite conform to the image of what they think Christians should be. Changed hearts needed here, too!

The love of God pouring through people. Hippie-type people. Straight-type people. Jesus People both, a giving out of the Christian message with cheerful dedication. Sure. Turning on to Jesus. You can read about Him in the Bible. You can hear about Him from the kids themselves. "Maranatha," they'll say. "What a way to go!"

This looks like the greatest spiritual "Turn-on" in the history of the country. And the kids are leading it. There's a new signal catching on too, these days. It's the forefinger pointed heavenward. "Only one way!" One way to go!  There's no estimating the magnitude of this new movement, but the Spirit of God is moving in a thrilling, exciting way. It appears that Southern California is being used as the launching pad. Look up, other states, Jesus is coming your way! And this is for real!
HOME      BACK      BACK TO 'PRINT MEDIA'      NEXT
Copyright 2019 by Chuck Girard & Chuck Girard Ministries.  All Right Reserved.
Website and Content Creation by One Spark Marketing