VARIETY
Wed. April 26, 1972 Record Roundup by Howard Lucraft   "Love Song" (Good News GNR-08100)
These are original religious songs in contemporary folk vein. Keyboard man Chuck Girard was involved in the writing of all but two melodies (some with a modal approach) are highly appealing - especially the title tune.  The four instrumentalists comprising Love Song (electronic keyboards, two guitars and bass) all sing. Vocal blend in harmony and diction are tops. There's some articulate guitar. It's creative today music with a message and tasteful musicianship that must be rated five stars. 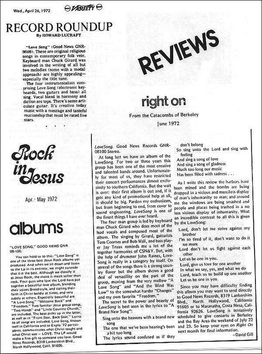 You can hold us to this: "Love Song" is one of the three best Jesus Rock albums yet produced. And when we sit down and listen to the LP in its entirety, we might concede that it is the best. Although we classify it as Jesus Rock, the music is much softer than rock. Four guys who love the Lord have put together a beautiful love album, blending their voices Bread-style, and stating their faith in Christ boldly at times, and very subtly at others.
7
Especially beautiful are "A Love Song," "Welcome Back," and "Freedom." Two familiar Jesus group songs, "Two Hands" and "Little Country Church," are included. The beat picks up in the latter as well as in "Front Seat, Back Seat." Lyrics to all songs are included. Love Song, known well in California and to Explo '72 participants, communicates what Christ taught and what Christ was - LOVE. The LP would make a fine gift to someone you love. Good News records, 8319 Lankershim Blvd. North Hollywood, CA 91605.
RIGHT ON
From The Catacombs Of Berkeley- June 1972

At long last we have an album of the Love Song. For two or three years this group has been one of the most creative and talented bands around. Unfortunately for most of us, they have restricted their concert performances almost exclusively to southern California. But the wait is over: their first album is out and, if it gets any kind of promotional help at all, it should be big. Pardon my enthusiasm, but from beginning to end, Love Song is one of the finest things I have ever heard.

The four man group is led by keyboard man Chuck Girard who does most of the lead vocals and composed most of the album. The singing by Girard, guitarists Tom Coomes and Bob Wall, and bass player Jay Truax reminds me a lot of CSN&Y. But, with the help of drummer John Raines, Love Song is really in a category by itself. On several of the songs there is a strong country flavor but the album shows a good deal of versatility on the part of the group, moving from the very mellow "A Love Song" and "And the Wind Was Low" to the somewhat harder "Changes" and my own favorite, "Freedom." The secret to the power and beauty of Love Song is best seen in the lyrics to "A Brand New Song":
Sing unto the heavens with a brand new song
The one that we've been hearing's been a hit too long
The lyrics sound confused as if they don't belong
So sing unto the Lord and sing with feeling
And sing a song of love
And sing a song of gladness
Much too long our music
Has been filled with sadness....
As I write this review the harbors have been mined and the bombs are being dropped in a vicious and merciless display of man's inhumanity to man; and around me the windows are being smashed and people and places being trashed in a no less vicious display of inhumanity. What an incredible contrast to all this is given by the Love Song:
Lord, don't let strive against my brother
I'm so tired of it, don't want to do it no more
Lord, don't let us fight against each other
Let us be one in you.
Lord, give us love for one another
In what we say, yes, and what we do
Lord, teach us to build up one another
Let us be one in you.
Since you may have difficulty finding this album you may want to send directly to Good News Records, 8319 Lankershim Blvd. North Hollywood, CA 91605 or to Maranatha, Costa Mesa, CA 92626. Love Song is tentatively scheduled to give concerts in Berkeley and the Bay Area the weekend of July 22 and 23. So keep your eyes on Right On next month for final information. - David Gill
Copyright 2019 by Chuck Girard & Chuck Girard Ministries.  All Right Reserved.
Website and Content Creation by One Spark Marketing