The new CD from Chuck’s Daughters and Granddaughters.
A collection of worship oriented songs done in their unique style, featuring the beautiful blend of family voices.

"This was the occasion that inspired Chuck Smith to think about doing the (Girard Girls) album.  When Alisa sang "Little Pilgrim," it was the first time I'd heard one of my kids do one of my songs in a public setting.  I did not know the other three (daughter Kriston, and grandaughters Lauren and Kailyn)  were there, so the performance of "Alleluia" was a real surprise to me. It was  also the first time I'd heard my kids sing together like that..." 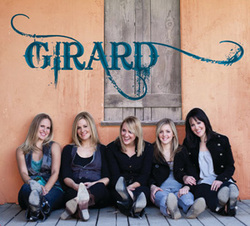 Together they performed Chuck’s classic song, “Sometimes Alleuia.” It was the first time Chuck had ever heard a public performance of one of his songs by a family member.

The performance and resulting YouTube video (Search “Girard Girls”) resulted in the recording of a full CD by the girls, adding sister Nikki Girard as a fifth member. The CD is a collection of original pop tinged worship songs, performed in their unique style, featuring the beautiful blend of family voices.

Anyone who appreciated the music of ZOEgirl and loves contemporary worship music will enjoy this special worship experience.
TRACK LISTING